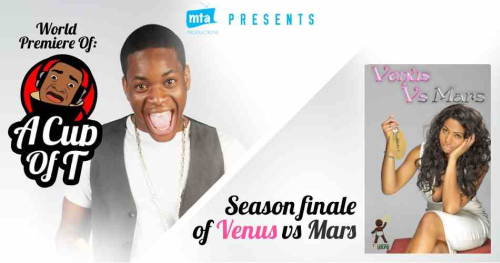 On July 26 in London’s Leicester Square, the home of film premieres, Prince Charles Cinema will host the world premiere of A Cup of T – one of the most hotly awaited shows of 2012. Together with the season finale of smash television series Venus vs. Mars this is a night not be missed as we celebrate the phenomenal achievements of these productions.

Tolu Ogunmefun, A Cup of T, who is best known as the Internet comedy sensation, Mr Don’t Jealous which has had over 20 Million YouTube views, said: “I’ve always believed that when you consistently work hard, you will always achieve your dreams, no matter how many setbacks you have. I’m extremely excited about the premiere. This is just the beginning of bigger and better things and hopefully you will see me in big movies like my uncle, Will Smith. So I want to see you all there. This is my first screening and this means a lot to me. We are going to party like crazy so come and join me in the popping of Fanta”.

This exclusive industry event will be an occasion filled with the stars from both shows and specially invited guests. Prior to the screening there will be a special Q&A with Tolu Ogunmefun [A Cup of T] and Baby Isako [Venus vs. Mars].

An after-party at Metra Night Club, follows the screening with DJ Cautious of Too Cold on the decks.

The world premiere of A Cup of T and the Venus vs. Mars season finale takes place on July 26, 2012  at the Prince Charles Cinema, 7 Leicester Place, London WC2H 7BY.