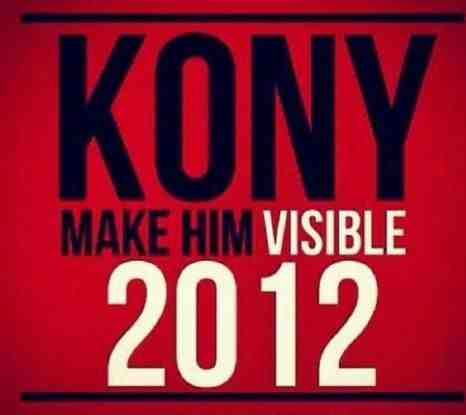 If I’m honest the first time I had ever heard of Kony was wednesday morning on twitter. I thought it was something new and cool because everyone was talking about it. So i googled it and realised it was a campaign to take down a criminal. Fair enough! It sounded like a good cause… however as the day went by and I realised what the campaign actually planned to do, I was lead to believe it was to raise money to create awareness to try and find a criminal ( forgive me if my interpretation is simplistic but this is what i got from it) again… fair enough. But the one thing at the back of my mind whilst reading this campaign is  that an on going issue throughout the whole world has been pin pointed to one man. I’m not trying to protect this disgusting evil man in anyway… but really is he the ONLY member of the LRA doing this single handidly? Is there going to be another name that the world “makes famous” each year? Is the twitter HYPE going to just fade after Rihanna stops tweeting “#KONY2012 Spread the word!!! youtube.com/watch?v=Y4Mnpz…” and starts tweeting about her next single release. 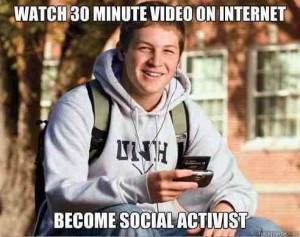 Does the campaigning stop after we all “cover the night” on April 20th.

I have a big problem with the fact that the campaign has put a date on resolving a lifetime of turmoil for some.  You can’t put a deadline on trying to fix an issue that has been growing and developing for so long. I understand that they want us all to act now, but unless we all pack our bags and jet off to Uganda with aid and a torch to find Kony it’s not going to work like that.

I personally don’t see the longevity in this campaign. Once they capture him… then what? This video didnt explain any of the post “Make Kony famous” plans. How will this effect the people in Northern Uganda once he is captured. How will this affect the people in Southern Sudan and Congo who also were affected by the LRA, if not equal to but maybe more than those in Uganda as they had less governmental involvement, but not mentioned in the campaign video.

This issue goes a lot deeper than Just Kony. I strongly believe and have an awareness of the high levels of corruption across the whole of Africa and although this could be the start of a revolution and has a positive humanitarian message behind it, it feels like a very simplistic ” QUICK FIX”  plan to an issue that has been destroying lives for over 2 decades. The fact that this is one of many promotional campaigns, petititions, and protests from The invisible Children organisation, is a clear sign that just catching Kony won’t be the end of this.

Although it may sound like I am being very pessimistic about the organisation, this is not the case, as I am completely  100% in support of the organisations cause and think the Invisible Children (IC) organsation is doing amazing things to create an awareness but…..  I don’t agree with the marketing and campaign moto “Make Kony famous”. I truely do not care about the level of fame for KONY and this title simply disgusts me. I understand that the KONY 2012 documentary was created and ”aims to make Joseph Kony famous, not to celebrate him, but to raise support for his arrest and set a precedent for international justice.” however I personally do not think that the capture of KONY will be the be all and end all of the LRA and its crimes.

The campaign in my eyes should be “STOP THE LRA” & offer solutions  to regain Uganda’s true values. Unfortunately, that is not as catchy and as sensationalised as Make Kony famous.

In addition to this I became very irritable whilst watching the film as in my head I was replaying these IMPORTANT questions.

What happens if they dont capture KONY in 2012?

How will Uganda, Congo & Sudan be improved?

Will it be improved?

The film blatantly failed to tell us and explain what the outcome will be once KONY is captured. This is why I am looking at the campaign and starting to wonder is there more to it than just to catch Kony?

Is there any reason for the US troops to be in Uganda when sources have informed us all that Kony has been out of Uganda since 2006 and hiding in Congo?

Once the 20th April or worst case scenario 2012 comes and goes and nothing has been resolved will the dream that they sold us be crushed and we move on to the next BAND- WAGON twitter hype campaign?

On that note, I ask that if you are in a financial position to support please do ( I’m not a hypocrite I AM FLAT BROKE SO CANNOT DONATE) but make sure you choose your charity organisation wisely.

Invisible Children inform you that 5 out of 8 million dollars goes to the awareness building through social media, online broadcast and product placement marketing, whilst the other 3 million dollars goes to the on the ground programs. 3 Million is good, however if you was lead to believe that all of your money was going into building a school and not creating a video to talk about building a school then this is wrong.

I know if i donate to a charity I want to know exaclty where my money is going. So please be careful, and look out for your own interests but also the interests of those you may be able to help.

Please do not attack me on my KONY VIEWS, it is merely my opinion.