Thank you for coming to #TheMainstream Oh what a night!

Last night I launched and hosted the first instalment of The Mainstream. The mainstream is an event that I have wanted to do for a long time, based on the amount of emails, DMs and conversations that I have with so many up and coming presenters about getting into presenting.

Originally I wanted to hold a workshop and share some of my experiences as a presenter, but then I really thought about it. What do I know about being a presenter?

That’s not me putting my self down in any way as I’ve definitely got experience and skills that I could pass on to others, but one thing about presenting that I’ve learnt over the years everyone’s path is VERY different. So I thought it wouldn’t be right to just do it MY way!

At the start of this year I decided what ever I think of I’m going to do! lol I know it sounds crazy but I had it on my mind a lot so I had to bring it to life. I hosted an event for FWOC in January and I loved the positive message, the networking and the amazing team so I thought who better than to partner with them for this new venture.

At the start of February we brainstormed and developed the idea and #TheMainstream was born. 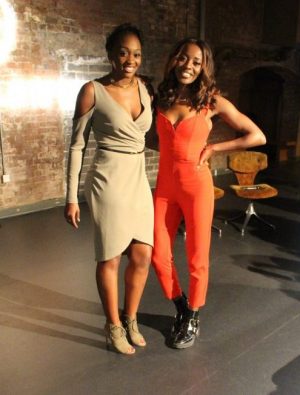 I knew straight away that I wanted AJ Odudu to be my first special guest and yesterday she was a testament to this.

She spoke openly about working her way up the ladder, getting her big break at BBC Switch at 21 as well as the highs and lows over the last 8 years of staying grounded and over coming rejection.

I was absolutely blown away by AJ’s positive outlook on life, as I know how hard the industry and rejection can be.

You definitely need thick skin to make it in The Mainstream, AJ has proven that a good heart and incredible personality will persevere!

A huge thank you to all of the amazing presenters that attended #TheMainstream it was great being able to come together, share our experiences, support each other and fly the flag for the next generation!

A special thank you to make up artist @BeatswithBrushes for giving me #TheMainstream look for the night and also our sponsor Hillery and Son for the delicious networking cocktails.

Subscribe and look for out the highlights video coming to www.youtube.com/RemelLondon

And keep following for more updates on #TheMainstream