As I was about to upload the new Chris Brown video Don’t wake me up… I creeped onto my timeline to hear news that Chris Brown and Drake allegdly had a bottle fight last night!

Although these may be some strange and crazy rumours, it is apparent that Chris was attacked by some form of sharp object. Allegedly a bottle thrown by either Drake or one of his entourage ( I wonder which bottle lol) 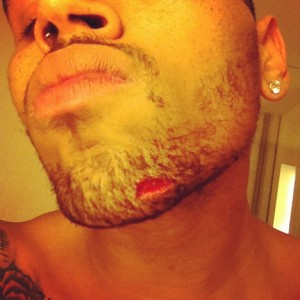 It was only last week that on twitter apparently Meek Mill, Chris Brown and Drake were all firing shots at each other regarding all of their “romantic” times with Rihanna which is possibly why the two came to blows last night, but it is said Chris is thought to have sent a bottle of champagne to Drake’s table as a peace offering.

Unconfirmed reports say the bottle was returned with a note referring to Rihanna which read: “I’m f****** the love of your life, deal with it.”

It’s unclear what happened exactly but his gash to the chin looks like a small mouse nibbled a piece of his chin bum fluff ewww.

All I can say is …. THIS IS LONG!!! Why are you all fighting over Rihanna? Take me instead and give me your money lol

I’m playing. But they are all acting up and don’t seem to care we can all see this embarassment! PFFFT it’ll prob help sell records so as originally planned I’ll go on to post Chris’ latest video.

ONE QUESTION… why is Chris Brown wearing a scarf around his knee? If this becomes a fashion statement i will follow whoever wears it on site! SMH