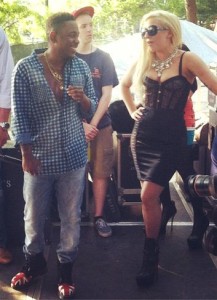 Lady Gaga and kendrick Lamar! YES I KNOW THE IDEA OF IT IS JUST WEIRD… but it’s actually beautiful! The track can be heard playing over the video shown below which features some of her recent tour footage and is the original version of “Bitch, Don’t Kill My Vibe”.

Gaga unveiled the mix of the track that features her on the vocals yesterday.
I don’t think i’ve actually paid much mind to Gaga before now. (Even though she’s everywhere and i must me walking around with my hands covering my ears), But this track shows a complete different side to her.
Just stripped down and giving some real easy-going vocals. She sounds great on the beat and Gaga and Kendrick really compliment each other.

Gaga was Originally announced as appearing on a track titled “Partynauseous” on good kid, m.A.A.d city however the track was then pulled from the album before its release.

Hopefully they can squeeze in some performances together… that would be great right!